Visual localization aims to estimate the localization, which is usually the the coordinate (orientation and localization) in the world coordindately, given one or multiple images. 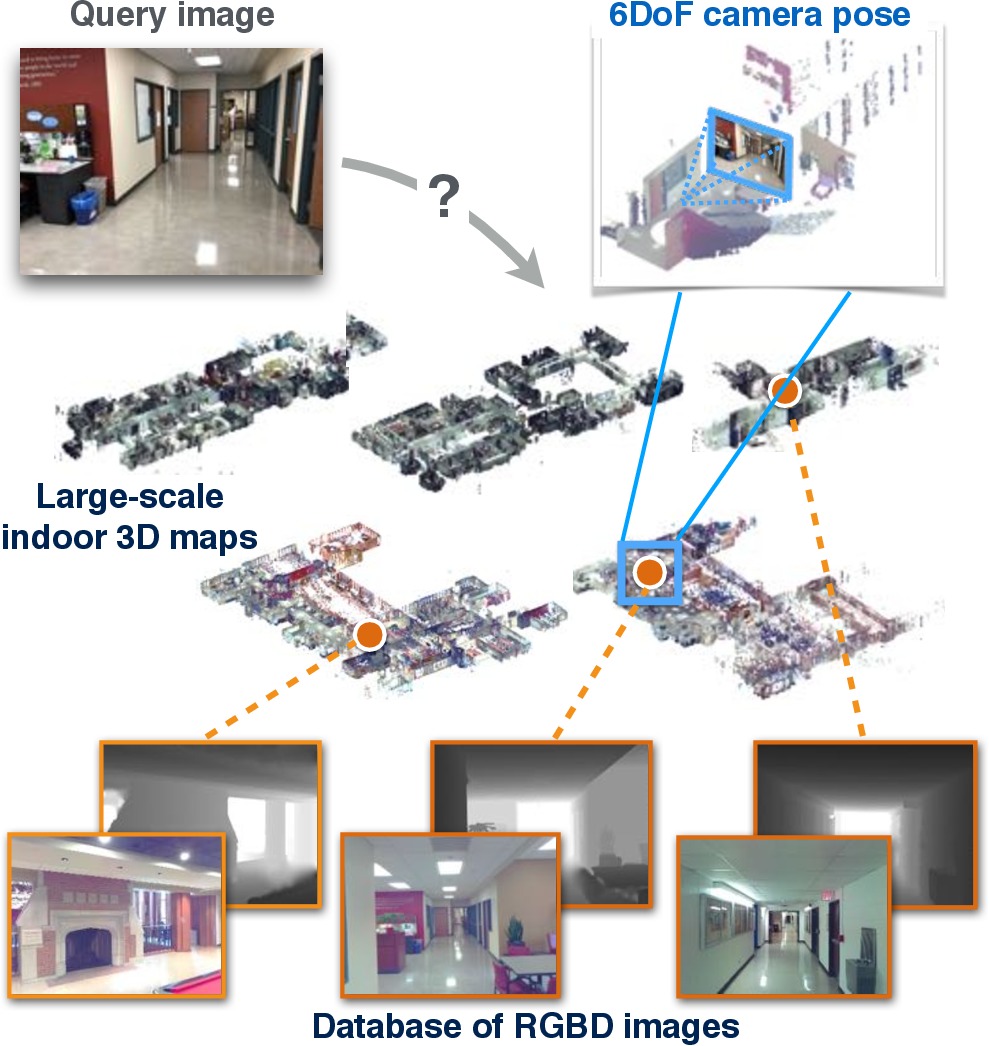 The methods can be roughly divided into two groups:

The contents of this note will mainly focus on learning based approaches.

There are different choices on combining the loss for $R$ and $t$:

PoseNet is the earliest work which tries to use convolution neural network to solve the camera post estimation problem. It learns to regression the input RGB image ($224\times224$) into a 6-DOF camera pose. Especially, the rotation is represented by Quanterion, where the loss function is $\ell(q, t) = \lvert t-t^\rvert_2 + \beta \lvert \frac{q}{\lvert q \rvert_2} - q^ \rvert_2$, where $t^$ and $q^$ is the ground truth of the camera location and orientation accordingly. For backbone, GoogleNet is used. The other contribution of the paper is to propose to use structure from motion to generate the groud truth camera post for the training data.

However, RANSAC is not differentiable, which limits its application in many learning based apporach. In DASC, a differeniable RANSAC is proposed, by modifiying the step select the best hypothese:

The proposed DSAC method is applied in camera post estimation problem, where a CNN is used to generate the hypothese given a $42\times42$ patch (with $40\times40$ patches per image) and the other CNN us used to score the hypothese. Those two CNNs are learned jointly and end-to-end.

DSAC+ method addresses the problem that the scoring CNN used in DSAC is prone to overfit/collapse. As a result, a inliner count is used instead. To make the count differentiable, sigmoid function replaces the step function. The input is $640\times 480$ image and output is $80\times60$ scene coordinate.

Spatial LSTM claims using a $2048$-dim output of CNN to regress for pose in PostNet is prone to overfit and affects the accuracy. To address this problem, Spatial LSTM proposes to use four LSTMs to extract structure information from $2048$-dim CNN output in four directions, which each reduce the dimension to $32$.

To my opinion, the benefits of using four LSTM to extract structure information in four directions is not very clear.

VidLoc proposes to use bidirectionary LSTM to explore the temporal information when computating the camera pose sequence from video. A CNN (similar as PoseNet) is used to extract feature from the image and then feed into LSTM. 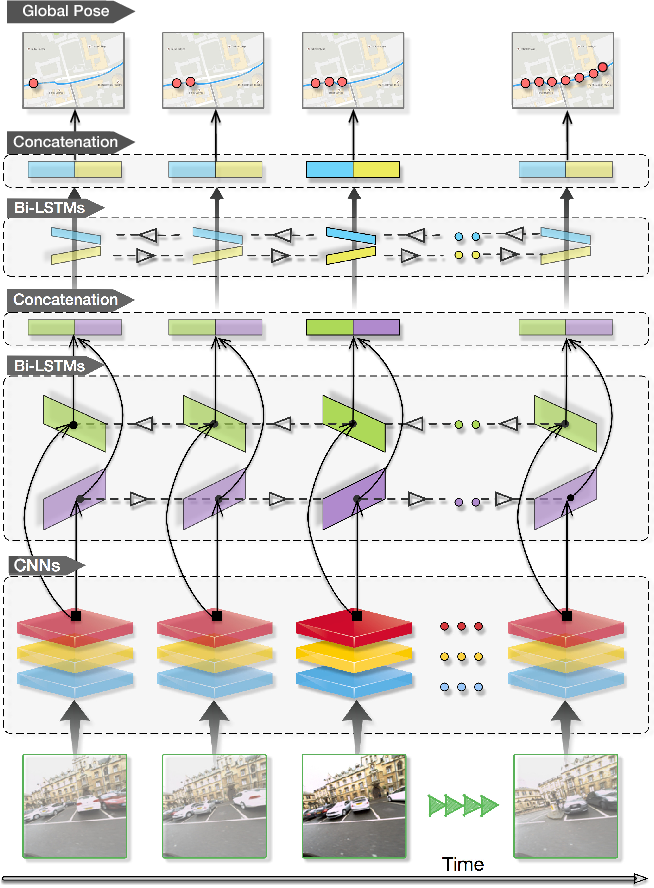 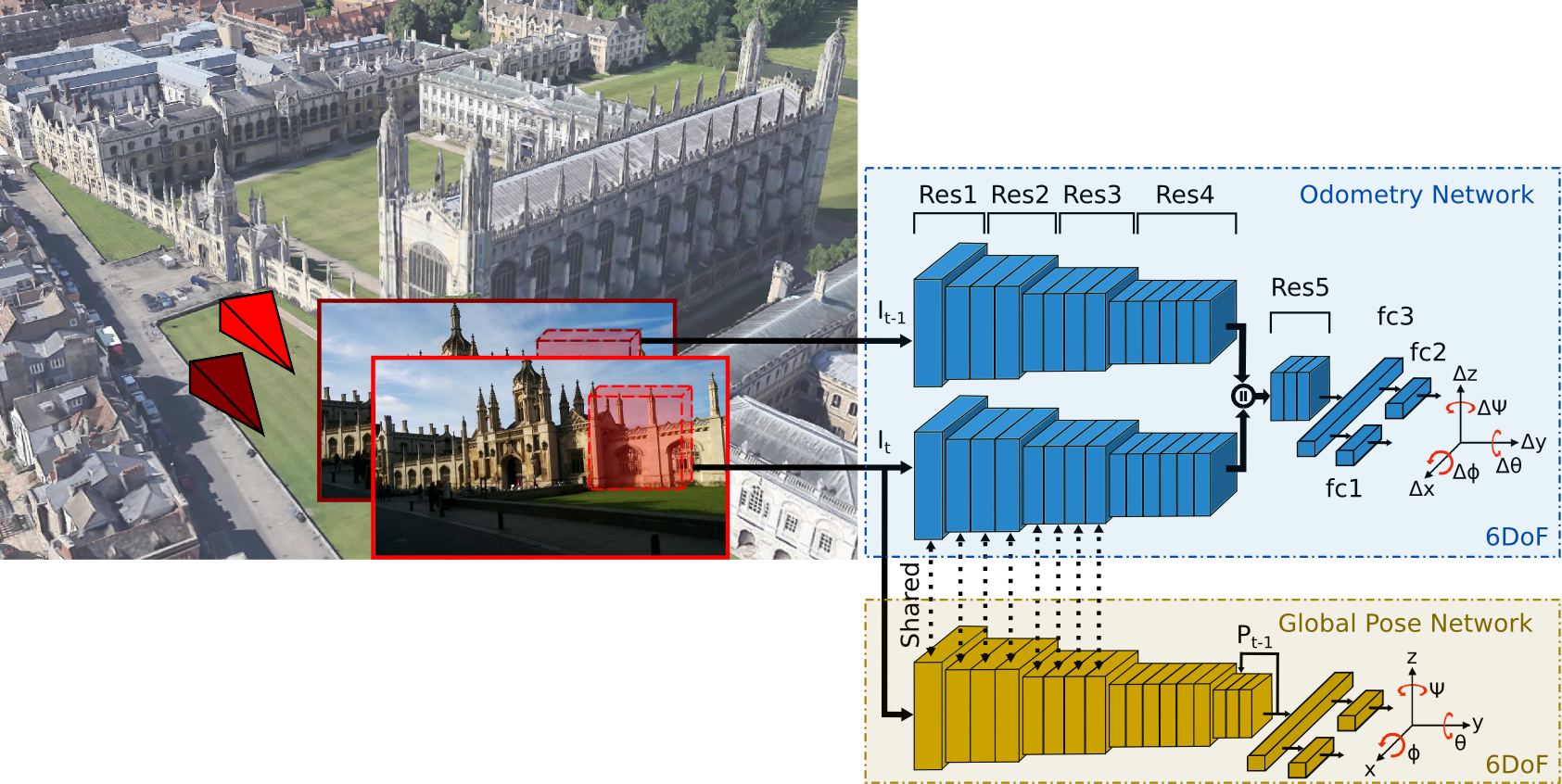 NetVLAD aims to learn a visual descriptor for place recognition. NetVLAD uses CNN as feature extractor and proposes to use Vector of Locally Aggregated Descriptors (VLAD) to replace existing pooling methods. VLAD is similar to the clustering:

In order to have sufficient training data, NetVLAD proposes the utilize the week label in Google street time machine data, which provides many panonama images associated with GPS location. NetVLAD assumes that the images with close GPS is likely to be similar to each other (potential positive, though we don’t know which one) and images with far GPS is unlikely to be similar to each other (hard negative), that means: \(\min_i{d(q, p_i)} +\epsilon <= d(q, p_j)\ \forall j\) , which naturally fits to hinge loss: \(L=\sum_j{max(0, \min_i{d(q, p_i)} +\epsilon - d(q, p_j))}\)

MapNet proposes to use the recurrent network to remember places visited in the past, as well as to re-localize itself with respect to those, which is updated incrementally using camera observations. In order to localize, these ground-projected camera features are matched against all possible rotations and locations (2D, since z is known).