If you use Google Images Search, you may find you are allowed to search images with image (uploading it or providing the url of the image). The returned results are visually similar to the query image. 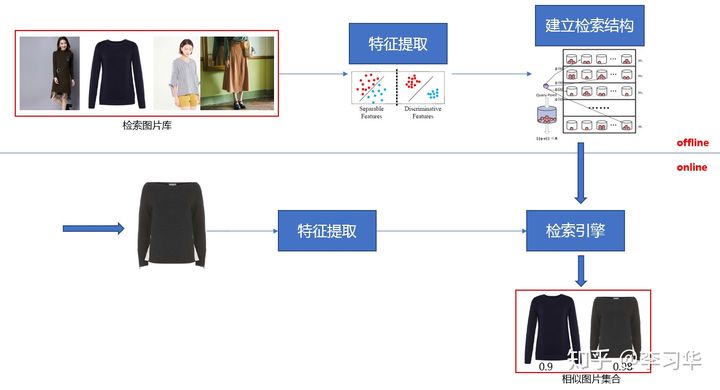 In the sections below, we will describe the details of each aspects.

Note for HOG, SIFT and SURF, the description will be normalized in order to be robust over illumination changes.

After descriptors are obtained, aggregation is then applied to merge all the descriptors of the image into a single feature vector. Several ways has been proposed, e.g.,

Since the success of convolution neural network in image classification, more and more works are proposing to use the convolution neural network as the feature detector of the image, e.g., End-to-end Learning of Deep Visual Representations for Image Retrieval and Collaborative Index Embedding for Image Retrieval. Those works has suggested the top level response map (which captures semantic information) doesn’t work as well as the intemediate level response map for image retrieval. Pooling method is then applied to aggregate the response map into the feature vector, e.g.,:

Typically the network is finetuned for improving the performance on the image retrieval:

LSH is a way to randomly partition the ambient space into cells that respect the desired similarity metric. The core building block of LSH are locality-sensitive hash functions. We say that a hash function (or more precisely, a family of hash functions) is locality sensitive if the following property holds: pairs of points that are close together are more likely to collide than pairs of points that are far apart. LSH data structures use locality-sensitive hash functions in order to partition the space in wich the dataset lives: every possible hash value essentially corresponds to its own cell.

Product quantization (PQ) is an effective vector quantization method. A product quantizer can generate an exponentially large codebook at very low memory/time cost. The essence of PQ is to decompose the high-dimensional vector space into the Cartesian product of subspaces and then quantize these subspaces separately.