This work observes that in addition to the foreground-background class imbalance challenge, current single shot object detectors also face another challenge: the misalignment between the training targets and inference configurations, where the training target of the classification is to classify the default, regular anchor, while the predicted probability is assigned to the corresponding regressed anchor which is generated by the localization branch.

SimpleDet: A Simple and Versatile Distributed Framework for Object Detection and Instance Recognition

This paper combines DenseNet and Spatial Pyramid Pooling for YOLO.

In this paper, we propose DetNAS to automatically search neural architectures for the backbones of object detectors. In DetNAS, the search space is formulated into a supernet and the search method relies on evolution algorithm (EA). In experiments, we show the effectiveness of DetNAS on various detectors, the one-stage detector, RetinaNet, and the two-stage detector, FPN.

Modern instance segmentation approaches are dominated by methods that first detect object bounding boxes, and then crop and segment these regions, as popularized by Mask R-CNN. In this work, we investigate the paradigm of dense sliding-window instance segmentation, which is surprisingly under-explored. Our core observation is that this task is fundamentally different than other dense prediction tasks such as semantic segmentation or bounding-box object detection, as the output at every spatial location is itself a geometric structure with its own spatial dimensions. To formalize this, we treat dense instance segmentation as a prediction task over 4D tensors and present a general framework called TensorMask that explicitly captures this geometry and enables novel operators on 4D tensors. We demonstrate that the tensor view leads to large gains over baselines that ignore this structure, and leads to results comparable to Mask R-CNN. These promising results suggest that TensorMask can serve as a foundation for novel advances in dense mask prediction and a more complete understanding of the task. Code will be made available.

Our assumption is that semantic features for one category should be the same as shown in (a) below. Due to the inferior up-sampling design in RoI operation, shown in (b), the reliable set (green) could guide the feature learning of the less reliable set (blue).

This paper introduces some trciks in training object detection network: 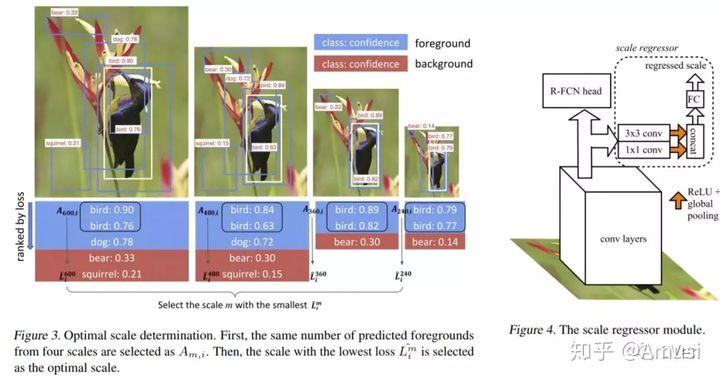 Our results show that re-scaling the image to a lower resolution will sometimes produce better accuracy. Based on this observation, we propose a novel approach, dubbed AdaScale, which adaptively selects the input image scale that improves both accuracy and speed for video object detection.

This paper argues that most of existing networks, process one single frame of image at a time, and may not fully utilize the temporal and contextual correlation typically present in multiple channels of the same image or adjacent frames from a video, thus limiting the achievable throughput. This limitation stems from the fact that existing CNNs operate on deterministic numbers. In this paper, we propose a novel statistical convolutional neural network (SCNN), which extends existing CNN architectures but operates directly on correlated distributions rather than deterministic numbers.

Transferring image-based object detectors to the domain of videos remains a challenging problem. Previous efforts mostly exploit optical flow to propagate features across frames, aiming to achieve a good trade-off between accuracy and efficiency. However, introducing an extra model to estimate optical flow would significantly increase the overall model size. The gap between optical flow and high-level features can also hinder it from establishing spatial correspondence accurately.

Instead of relying on optical flow, this paper proposes a novel module called Progressive Sparse Local Attention (PSLA), which establishes the spatial correspondence between features across frames in a local region with progressive sparser stride and uses the correspondence to propagate features. Based on PSLA, Recursive Feature Updating (RFU) and Dense Feature Transforming (DFT) are proposed to model temporal appearance and enrich feature representation respectively in a novel video object detection framework.

By introducing a temporal dimension to the problem, humans can rely on contextual cues and memory to supplement their understanding of the image. Based on this observation we introduce a novel interleaved framework where two feature extractors with drastically dif- ferent speeds and recognition capacities are run on different frames. The features from these extractors are used to main- tain a common visual memory of the scene in the form of a convolutional LSTM (ConvLSTM) layer, and detections are generated by fusing context from previous frames with the gist from the current frame. Furthermore, we show that the combination of memory and gist contains within itself the information necessary to decide when the memory must be updated. We learn an interleaving policy of when to run each feature extractor by formulating the task as a reinforce- ment learning problem.

The network utilize the idea of Feature Pyramid Networks for Object Detection and uses ResNet as the backbone of each pyramid level. 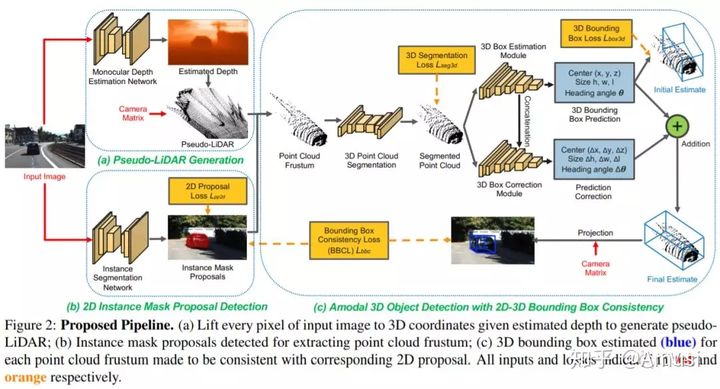 In this work, we aim at bridging the performance gap between 3D sensing and 2D sensing for 3D object detection by enhancing LiDAR-based algorithms to work with single image input. Specifically, we perform monocular depth estimation and lift the input image to a point cloud representation, which we call pseudo-LiDAR point cloud. Then we can train a LiDAR-based 3D detection network with our pseudo-LiDAR end-to-end. Following the pipeline of two-stage 3D detection algorithms, we detect 2D object proposals in the input image and extract a point cloud frustum from the pseudo-LiDAR for each proposal. Then an oriented 3D bounding box is detected for each frustum. 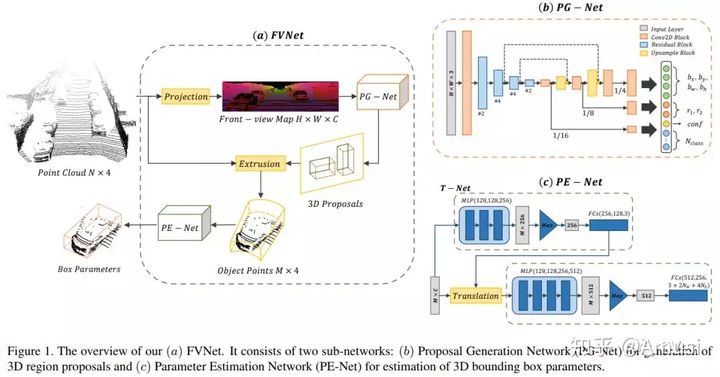 this paper, we propose a novel framework called FVNet for 3D front-view proposal generation and object detection from point clouds. It consists of two stages:

In this paper, we propose a monocular 3D object detection framework in the domain of autonomous driving. Unlike previous image-based methods which focus on RGB feature extracted from 2D images, our method solves this problem in the reconstructed 3D space in order to exploit 3D contexts explicitly.

We argue that it is more effective to infer the 3D bounding boxes from the generated 3D scene space (i.e., X,Y, Z space) compared to the image plane (i.e., R,G,B image plane).

We propose a data enhancement method based on the foreground-background separation model. While this model uses a binary image of object target random perturb original dataset image. Perturbation methods include changing the color channel of the object, adding salt noise to the object, and enhancing contrast. The main contribution of this paper is to propose a data enhancement method based on GAN and improve detection accuracy of DSSD.