Running Your Flask Application Over HTTPS

Miguel Grinberg has talked about how to run Flask over https in his article Running Your Flask Application Over HTTPS.

I have summarized the most important sections below.

The Simplest Way To Do It

Flask, and more specifically Werkzeug, support the use of on-the-fly certificates, which are useful to quickly serve an application over HTTPS without having to mess with certificates. All you need to do, is add ssl_context=’adhoc’ to your app.run() call. As an example, below you can see the “Hello, World” Flask application from the official documentation, with TLS encryption added:

To use ad hoc certificates with Flask, you need to install an additional dependency in your virtual environment:

When you run the script, you will notice that Flask indicates that it is running an https:// server:

Simple, right? The problem is that browsers do not like this type of certificate, so they show a big and scary warning that you need to dismiss before you can access the application. Once you allow the browser to connect, you will have an encrypted connection, just like what you get from a server with a valid certificate, which make these ad hoc certificates convenient for quick & dirty tests, but not for any real use. 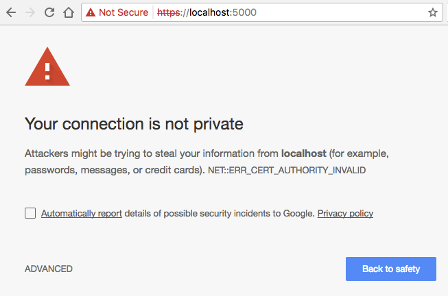 You can generate self-signed certificates easily from the command line. All you need is to have openssl installed:

This command writes a new certificate in cert.pem with its corresponding private key in key.pem, with a validity period of 365 days. When you run this command, you will be asked a few questions. We can now use this new self-signed certificate in our Flask application by setting the ssl_context argument in app.run() to a tuple with the filenames of the certificate and private key files:

Of course we all know that the Flask development server is only good for development and testing. So how do we install an SSL certificate on a production server?

If you are using gunicorn, you can do this with command line arguments:

How to handle unsafe traffic

Another important item you need to consider is how are clients that connect through regular HTTP going to be handled. The best solution, in my opinion, is to respond to unencrypted requests with a redirect to the same URL but on HTTPS. For a Flask application, you can achieve that using the Flask-SSLify extension. With nginx, you can include another server block in your configuration:

When you request a certificate from a CA, this entity is going to verify that you are in control of your server and domain, but how this verification is done depends on the CA. If the server passes this verification then the CA will issue a certificate for it with its own signature and give it to you to install. The certificate is going to be good for a period of time that is usually not longer than a year. Most CAs charge money for these certificates, but there are a couple that offer them for free. The most popular free CA is called Let’s Encrypt.

Getting a certificate from Let’s Encrypt is fairly easy, since the whole process is automated. Assuming you are using an Ubuntu based server, you have to begin by installing their open source certbot tool on your server:

The command to request a certificate with this method is as follows:

In this example, we are trying to generate a certificate for a example.com domain, which uses the directory in /var/www/example as a static file root. If certbot is able to verify the domain, it will write the certificate file as /etc/letsencrypt/live/example.com/fullchain.pem and the private key as /etc/letsencrypt/live/example.com/privkey.pem, and these are going to be valid for a period of 90 days.

If you are using nginx as reverse proxy, you can take advantage of the powerful mappings that you can create in the configuration to give certbot a private directory where it can write its verification files. In the following example, I extended the HTTP server block shown in the previous section to send all Let’s Encrypt related requests to a specific directory of your choice:

Certbot is also used when you need to renew the certificates. To do that, you simply issue the following command:

Achieving an SSL A+ Grade

If you use a certificate from Let’s Encrypt or another known CA for your production site and you are running a recent and maintained operating system on this server, you are likely very close to have a top-rated server in terms of SSL security. You can head over to the Qualys SSL Labs site and get a report to see where you stand.

One of the areas in which it is easy to make an improvement is in how the coefficients that are used during the encryption key exchange are generated, which usually have defaults that are fairly weak. Using the openssl tool, you can run the following command:

when it’s done, you will have a dhparam.pem file with strong coefficients that you can plug into the ssl server block in nginx:

Next, you will probably need to configure which ciphers the server allows for the encrypted communication. This is the list that I have on my server:

In this list, disabled ciphers are prefixed with a !.

Below you can find my current nginx SSL configuration, which includes the above settings, plus a few more that I added to address warnings from the SSL report: