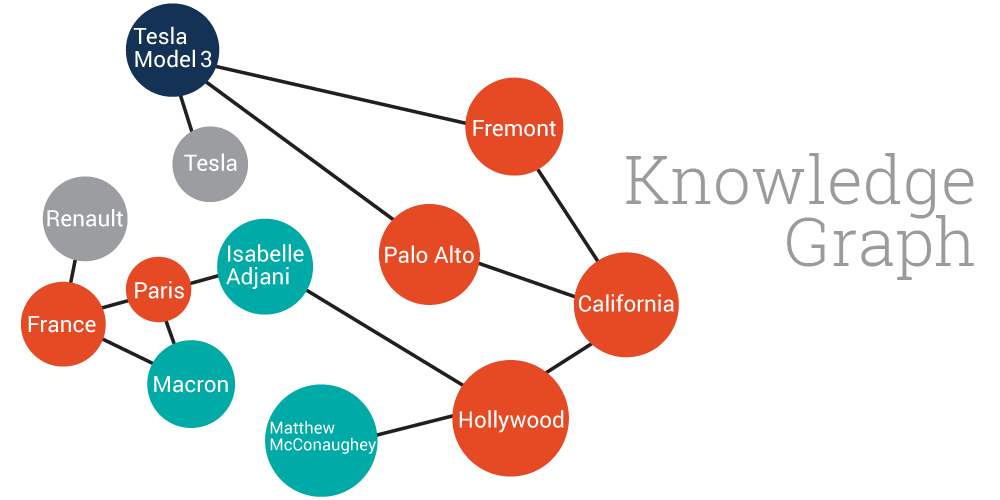 Graphs are commonly used in different real-world applications, e.g., social networks are large graphs of people that follow each other. Graph embeddings are the transformation of property graphs to a vector or a set of vectors. Embedding should capture the graph topology, vertex-to-vertex relationship, and other relevant information about graphs, subgraphs, and vertices. The more properties embedder encodes the better results can be retrieved in later tasks.

Distributed Representations of Words and Phrases and their Compositionality

Word2vec is one of the most commonly used methods for conversion of text data to the feature vector. Word2vec utilizes the co-occurences of words (n-gram) in document corpus for the computation of the embedding. Additionaly, it formluates the embedding as one of the following problems:

DeepWalk: Online Learning of Social Representations proposed in 2014 was one of most important papers regarding ideas for graph embedding. This is how it works:

The first step is more important, more specifically, how to define the random walk. In DeepWalk, the transition probability from Node a to Node b is proportional to the weight of edges a to b.

Line considers the similarity of vertices in two aspects:

Compared with Line, GraRep considers higher order similarities, where k-order similarity is computed as the probability of traversing from vertex to the other vertex within k-hoops.

where $w_vc$ is the weight of the edge between v and c; $d_tx$ is the distance between t and x. Smaller p encourages BFS; Smaller q encourages DFS.

struc2vec proposes that embedding should not consider the direct connectivty of two vertices, but the similarity of structure of two vertices in the network. Note, in many applications, similar vertices do tend to be connected to each other; but this may not hold in all applications.

Let $f_k(u,v)$ is the similarity of two nodes up to k-distance:

$g$ is function for measuring similarity of two sequence, $R$ is a traverse sequence.

All the above methods need to be recomputed, when the graph changes. GraphSAGE tries to address this problem by learning aggregate functions instead of the embedding itself. It contains the following steps:

The aggregate functions should be orderless. Some typically choices are: CANE considers not only structural similarity but also the property simlarity of vertices and edges. Further, it utilizes word2vec to convert the text associated with each node to a list of feature vectors, then organize those feature vectors as a matrix. CNN is applied to extract matrix features; then row pooling and column pooling is applied to extract attention vector, which is the final embedding. SDNE is based on an auto-encoder. It takes the adjacency matrix as input and requires two conditions:

The basic idea of GraphGAN is 1) the generator generates a new edge in the graph and 2) the discriminator will predict whether an edge exists in the graph or not. In the ideal case, generator will be able to generate edge (based on similarity of embeddings of two vertices) where the discriminator cannot tell whether that edge exists in the original graph or not. The result is, the embedding captures the 1st order information of the graph. 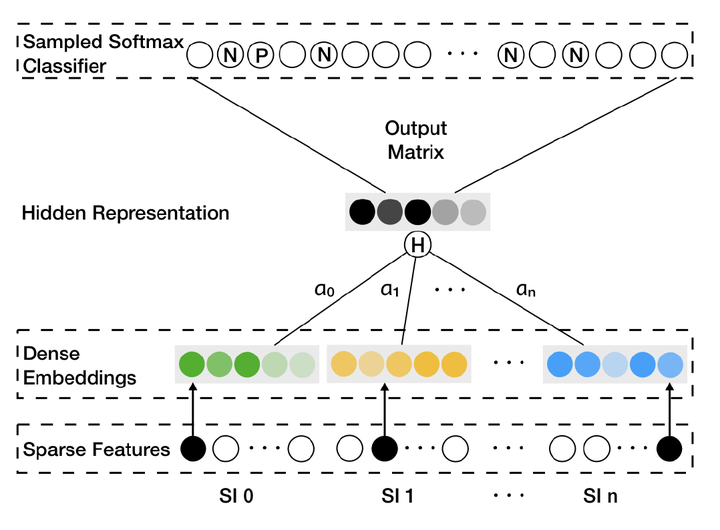 Enhanced Graph Embedding with Side Information improves DeepWalk by incorporating the side information. Within the recommendation system cold start is often a challenging but common problem. The situation occurs when a new vertex has few connections to the existing vertices in the graph. This results in DeepWalk cannot generate meaningful embedding for the new vertex. EGES proposes to use side information to address such problems.

The idea of EGES is intuitive: using different side information to generate different embeddings then applying average pool to combine those embeddings.