Google Brain proposed MLP-Mixer (code is available in google-research/vision_transformer official) which solely used multi-perceptron network (MLP) for computer vision tasks. This is different most commonly used convolution neural network (CNN) or more recently transformer based approaches. The experiment on image classification indicates that, given sufficient amount of data (e.g., 100M images) for pre-training then fine-tuned for target task (ImageNet 2012), MLP-Mixer is able to achieve competitive result as CNN and transformer. However, the performance drops far belower than CNN when insufficient amount of data are available for pre-training, especially for its larger variation. It is also found at similar accuracy, MLP-Mixer and transformer are faster than CNN (ResNet) for inference and training by 2~3 times.

Image below shows the an overview of the proposed model. 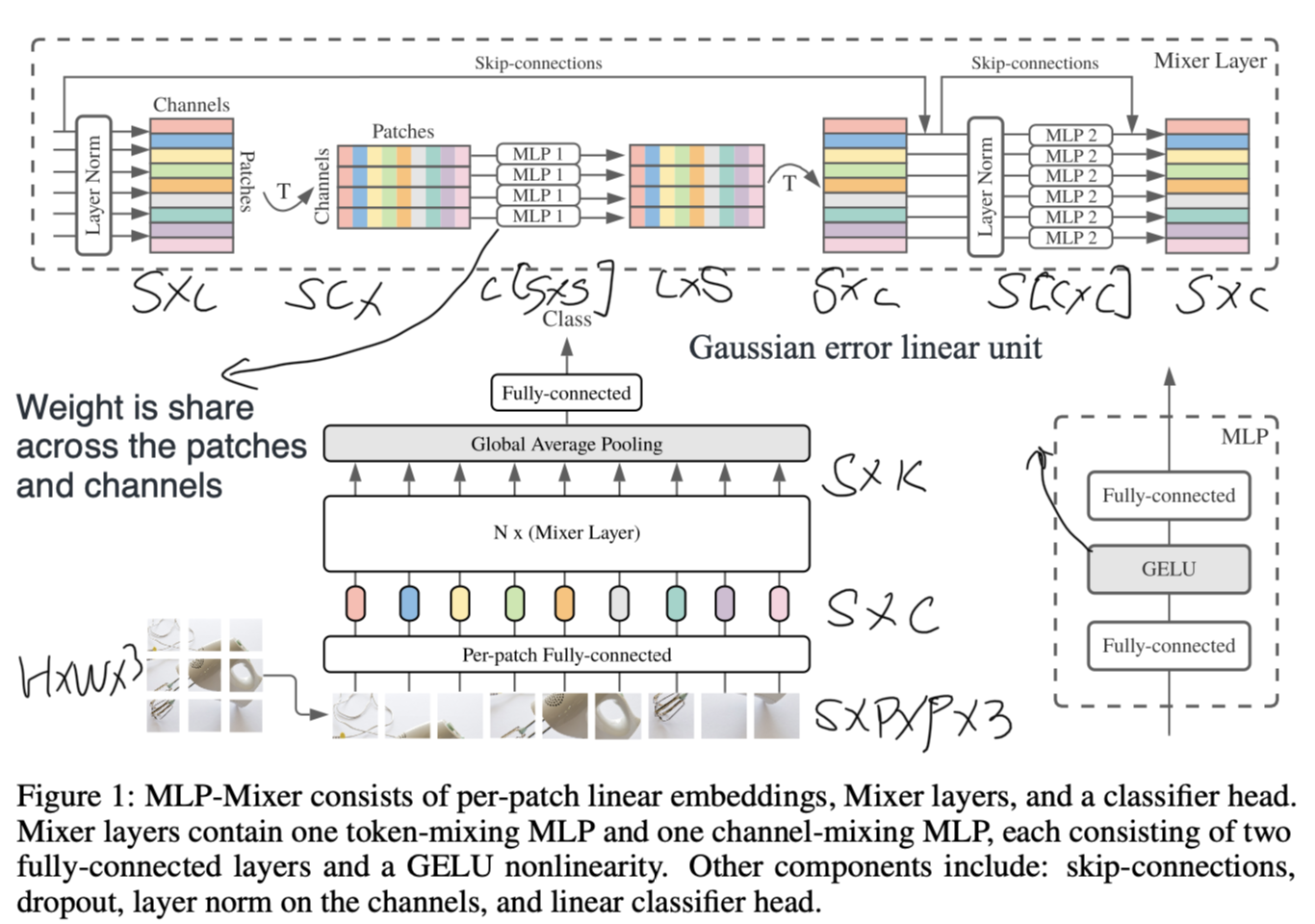 It accepts a sequence of linearly non-overlaping projected image patches (also referred to as tokens) shaped as a “patches × channels” table as an input, and maintains this dimensionality. Here assume the input image is \($H\times W \times 3\) and divided into patches \(S\times P\times P \times 3\), where \(S=\frac{H}{P}\frac{W}{P}\) is the number of patches. Each patch is projected to a feature vector of \(\mathbb{R}^{C\times 1}\) via a fully connected layer shared for all patches.

These two types of layers are interleaved to enable interaction of both input dimensions. The MLP layers could be written as:

We fine-tune using SGD with momentum, batch size 512, gradient clipping at global norm 1, and a cosine learning rate schedule with a linear warmup. We do not use weight decay when fine-tuning.

The table above compares the performance of MLP-Mixer method (pink) to transformer (blue) and CNN. The result are very close which is within 1% for top-1 accuracy, when sufficient amount of data (e.g., 10s of million) is available for pre-training. Note 1.2M images from ImageNet 2012 alone is insufficient. 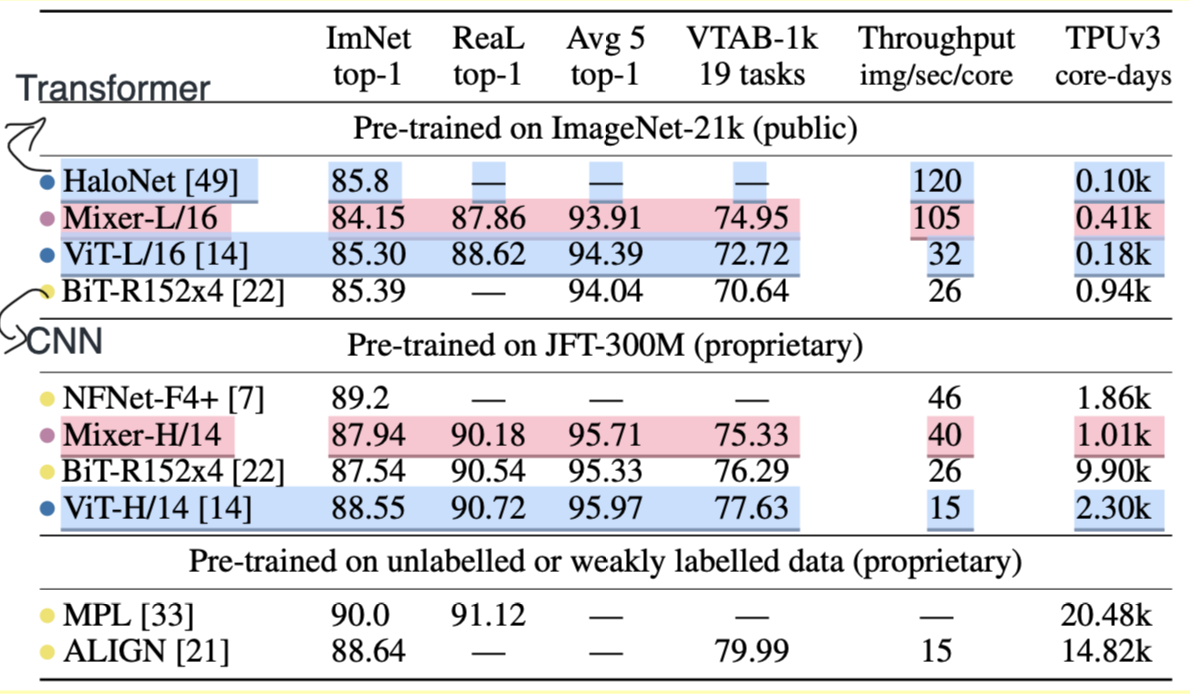 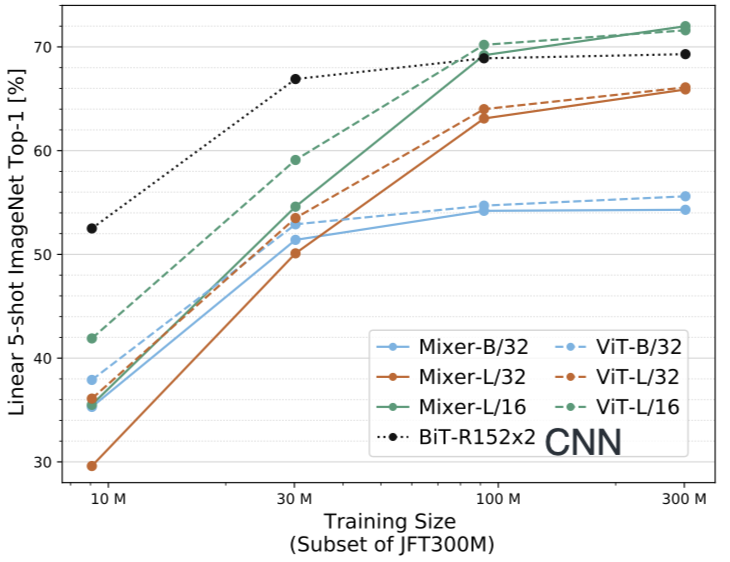 Those figures the training time and inference time. It indicates that, at similar accuracy, MLP-Mixer and transformer are faster than CNN (ResNet) for inference and training by 2~3 times.

This table compares the performance of model vs mode size. Obviously, when only ImageNet 2012 (1.2M images) is avaiable for training and pre-training, the accuracy of MLP-Mixer is low. The larger variant (L/16) suffers more than the smaller variant (B/16) 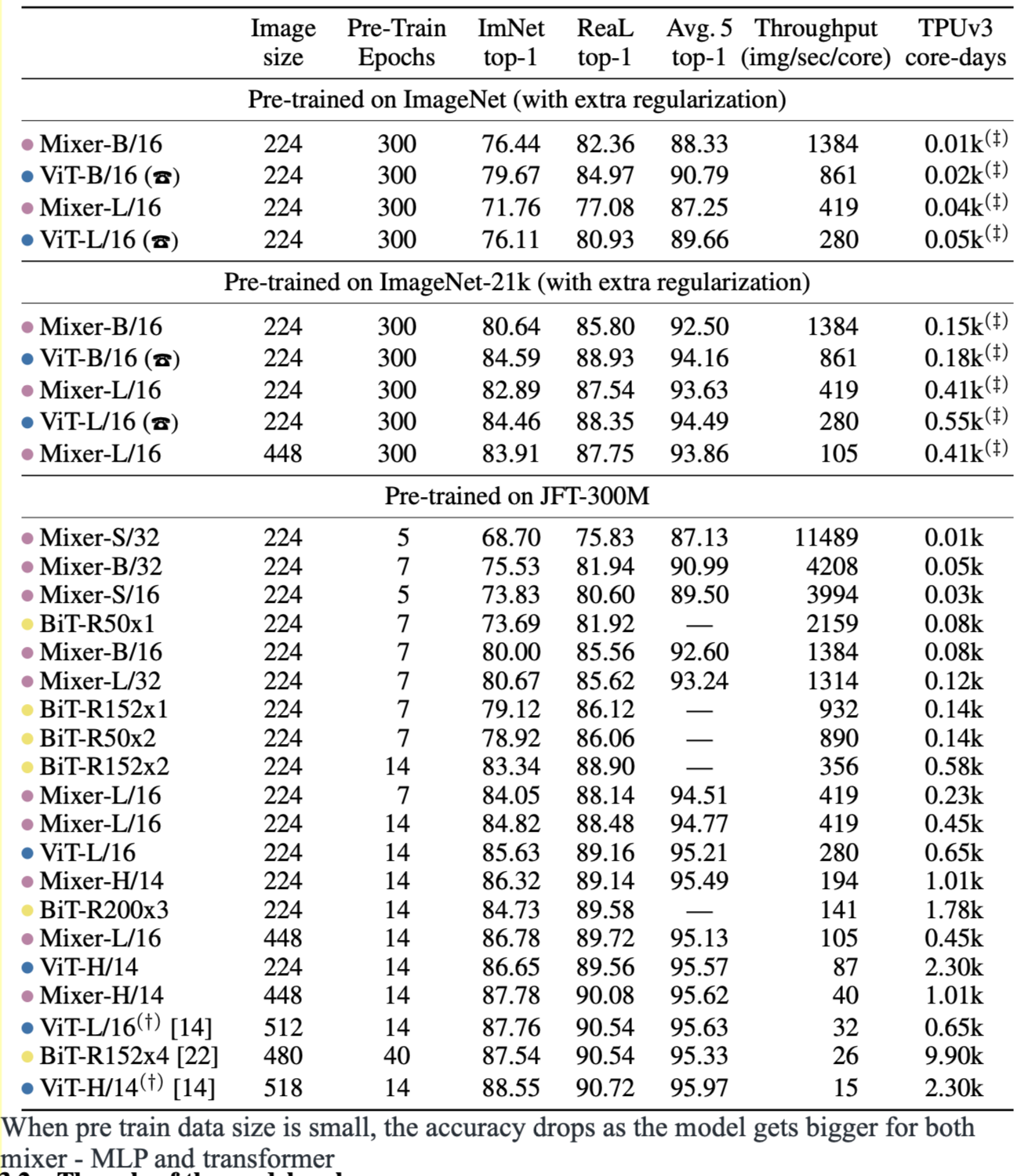 Relationship to CNN and Transformer

Modern deep vision architectures consist of layers that mix features (i) at a given spatial location, (ii) between different spatial locations, or both at once. In CNNs, (ii) is implemented with N × N convolutions (for N > 1) and pooling. Neurons in deeper layers have a larger receptive field [1, 27]. At the same time, 1×1 convolutions also perform (i), and larger kernels perform both (i) and (ii). In Vision Transformers and other attention-based architectures, self-attention layers allow both (i) and (ii) and the MLP-blocks perform (i). The idea behind the Mixer architecture is to clearly separate the per-location (channel-mixing) operations (i) and cross-location (token-mixing) operations (ii). Both operations are implemented with MLPs.

When we compare the MLP-Mixer shares to CNN, we could find some interesting points: